Below is a map of the top Dublin Attractions. If you are looking for what to do in Dublin, Dublin Zoo is the top tourist attraction and is a great family day out.

Located in the Phoenix Park in the heart of Dublin city, Dublin Zoo is Ireland’s most popular visitor attraction, and welcomed almost one million visitors last year. It was opened in 1830 and is the third oldest zoo in the world. Children are attracted to the impressive display enacted daily by the sea lions, while the penguins and elephants always generate major interest. Dublin Zoo is much more than a fun-filled; stimulating day out for all the family... it’s a place to learn about wild animals, especially those which are endangered.
Address: Phoenix Park, Dublin 8
Phone: +353 (0)1 4748900
Web: www.dublinzoo.ie

Built in 1204 by King John, the castle has a bloody and ignoble past in our city's history, from the impaling of Irish Chieftains on its walls to the more recent housing of the British Administration up to 1922. The State Apartments, Undercroft and Chapel Royal are open to visitors and there are regular guided tours.
Address: Dame Street, Dublin 2
Phone: +353 (0)1 6777129
Web: www.dublincastle.ie

An official student-guided walking tour of the historic campus of Trinity College Dublin is available. The tours depart from a desk at the Front Arch of the College and last for 30 minutes. The tour gives an overview of the history of the College, its architecture, famous graduates, and an introduction to the Old Library and the Book of Kells.
Web: www.tcd.ie

The Old Library and the Book of Kells Exhibition - a “must see” on the itinerary of all visitors to Dublin. Located in the heart of Dublin City, a walk through the cobbled stones of Trinity College Dublin will bring visitors back to the 18th century, when the magnificent Old Library building was constructed. Inside is housed the Book of Kells - a 9th-century gospel manuscript famous throughout the world.
Web: www.tcd.ie/library/bookofkells

The Guinness Storehouse is one of Dublin's top tourist attractions. There is a walking tour through the brewing process at St James's Gate where illustrations of brewing techniques from past to present of Arthur Guinness can be experienced. At the end of the tour you will have the opportunity to taste a complimentary pint in the Gravity Bar and enjoy a 360-degree view of Dublin. Gravity Bar is the highest bar in Dublin located meters off the ground.
Web: www.guinness-storehouse.com

Rich in Irish history and culture, Kilmainham jail is the largest unoccupied jail in these islands and is a visitor centre and a major tourist attraction to visitors staying in Dublin city, it offers a panoramic view of Irish history and a remarkably chilling taste of how it was like to be incarcerated here between 1796 and 1924 when it opened an closed. Some of Irelands famous rebel leaders were imprisoned here such as Robert Emmet and Charles Stewart Parnell, as well as the names of the leaders of the 1916 rebel leaders.
Address: Inchicore Road, Kilmainham, Dublin 8
Phone: +353 (0)1 4535984
Web: www.heritageireland.ie/en/dublin/kilmainhamgaol

In 1864 the National Gallery was opened and houses many fine art pieces. These are strongly emphasised on Irish art, balanced carefully with a representation of the major European schools of art. There are more than 15,00 art works on display in the gallery, which have been largely donated over the past few decades, with special exhibitions changed on a regular basis. Admission is free but group tours should book in advance.
Web: www.nationalgallery.ie

The National Wax Museum in Dublin is always a good day out for adults and kids alike. Walk through the tunnels where children will find a World of Fairytales and Fantasy. It’s a magical journey for children, where they will find beanstalks, genies and magic lamps. The two exits from the Wax Museum are 1) The Chamber of Horrors or 2) The Hall of the Megastars, depending on your preference either scary or the glitz and glam. There is a man reading the Irish Times in the lobby, take a good look at him!
Web: www.waxmuseumplus.ie

There are over one million stories buried in Glasnevin Cemetery, Gravediggers, Body Snatchers, Rebels and Revolutionaries, ordinary and extraordinary people. We want to share their stories with you. The secrets are in the stones. The City of the Dead – an immersive exhibition in the basement of the museum, covers the burial practices and religious beliefs. The Milestone Gallery houses a succession of special exhibitions on key historical figures, starting with Glasnevin’s founder Daniel O’Connell.
Web: www.glasnevinmuseum.ie 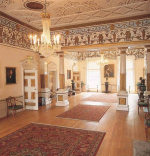 Dublin is famous as a city of writers and literature, and the Dublin Writers Museum is an essential visit for anyone who wants to discover, explore, or simply enjoy Dublin's immense literary heritage. The building, a restored Georgian mansion on Parnell Square, is a treasure in itself. The sumptuous plasterwork in the first floor Gallery of Writers is worth a visit alone. The writers featured in the Museum are those who have made an important contribution to Irish or international literature or, on a local level, to the literature of Dublin.
Web: www.writersmuseum.com

The General Post Office (GPO) in Dublin is the headquarters of the Irish postal service, An Post. It is also one of Ireland's most famous buildings, and was the last of the great Georgian public buildings erected in the capital. During the 1916 Easter Rising, the GPO served as the headquarters of the uprising's leaders, Patrick Pearse and James Connolly. The original columns outside are still pocked with bullet-marks. An original copy of the Proclamation of the Irish Republic is on display in the An Post museum at the GPO.
Web: www.anpost.com/About/History-Heritage

Preference cookies are used to keep track of your preferences, e.g. the language you have chosen for the website. Disabling these cookies means that your preferences won't be remembered on your next visit.

We use analytical cookies to help us understand the process that users go through from visiting our website to booking with us. This helps us make informed business decisions and offer the best possible prices.